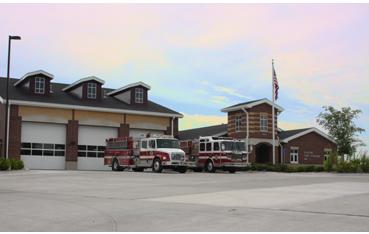 sys-tek provided conceptual MEP design of Fire Station #7 working closely with the design-build team of Titan Construction and Gossen Livingston for the city of Olathe, Kansas. They new one-story 13,000 Square Foot station is located near the intersection of 161st Stret and Mur-len.

The Fire Department’s primary goal for the development of this station was to minimize response time. The station was designed to maximize access to the apparatus bays, and all architectural features and systems were designed around this goal. The station was designed as a single story, slab-on-grade structure to help it fit in with the residential scale of its surroundings, and minimize the potential for firefighter injuries associated with multistory stations with poles. The station incorporates six apparatus bays with overhead doors and living quarters for up to seven fire fighters per shift.
sys-tek followed the performance specifications outlined by the City of Olathe to deliver what they needed, and focused on providing MEP systems that are functional and easily accessible and maintainable. sys-tek designed all MEP systems including HVAC, plumbing, fire protection & alarm, electrical power & lighting, and data/communication/security construction documents for this facility. This facility also has a diesel fuel-powered emergency generator to allow for 24/7 operation of critical systems.

Making Sure it Works

sys-tek also provided testing, adjusting, and balancing (TAB) and system commissioning near the end of the project for the MEP systems of this building.