Sys-Tek has worked in this ever-expanding campus since our inception nearly two decades ago, and since 2002, we’ve worked closely with facility operations in implementing energy and optimization programs that have proven to provide real results. In fact, review of energy use over the past five years of this campus shows energy use continually decreasing while the hospital added over 130,000 square feet, building out a new cardiac care unit with operating rooms and finishing 8 floors of a 12-story medical tower.

Substantial energy savings were achieved through chiller plant optimization. North Kansas City Hospital was built over several decades, so there’s a mix of new with old. Pumps in distribution systems were added just to be safe. Chillers were installed without really knowing how the future would unfold, leaving the hospital with an operating nightmare. Through extensive field testing and computer modeling we optimized the chiller plants serving the hospital, providing over $120,000 in measured energy savings.

Through integrated field testing, we found that the medical tower was introducing over 100,000 CFM of unneeded fresh air. Without field testing, this would not have been discovered, as the building pressurization was being counteracted by return exhaust fans. Through testing, we modified air flow stations to provide accurate means for measuring. This required a custom diverter plate in the fresh air intakes, which was designed by Sys-Tek.

Sys-Tek designed and built customized data loggers that we launched throughout the main hospital, and found solutions to provide customized trends for CO2 levels and building pressurization. The trend data showed there was a large number of hours where the hospital CO2 levels were essentially equal to outside. Also, building pressurization would go out of control, and we could track the root cause back to the air handling unit control sequences. With this data, control systems and sequences were optimized to improved pressurization in the building by looking at building pressure and CO2 levels. From the customized data loggers, we developed a program to install CO2 sensors and recalibrate and optimize the operating sequence of over 60 air handling systems. By doing this, there was a measured savings of over $300,000 in energy cost.

Under this project, Sys-Tek implemented energy optimization upgrades as part of a new central plant equipment upgrade and replacement project. Basically, you can only optimize what you measure. Therefore, the key to implementing energy optimization was getting accurate baseline field measurements. With this data in hand, we could do the engineering and work through various operating scenarios on paper prior to implementing in the field.

Computer modeling of the chiller plant and distribution system, along with field data, showed us we could optimize pumps through modifying impellers and replacement of motors. However, we also found unusual wear on pump seals, and through a cost benefit analysis, we proved that pump replacement would provide the most value for the capital dollars spent. In all, 11 of the 13 pumps serving the chiller plant were replaced and a tertiary pump was added to increase pumping capacity. Using our field measured baseline and adding key flow meters, differential pressure sensors and temperature measurement, we optimized control sequences to maximize the energy savings of the chiller plant based on actual real load, condenser water temperature and time of day. Time of day played a role as we knew how the chiller plant loaded and unloaded on any typical day.

To maximize the secondary pump savings, we changed the control sequence to optimize the temperature drop in the secondary loop. In any primary/secondary system, this is a key factor in optimizing energy use and control. We changed the design from operating off differential pressure to operating from a flow meter installed in the longest pressure drop run. By doing this we continually acquired a larger than 10F temperature difference in the secondary loop. The energy savings for secondary pumping was substantial and the operating benefit from no longer over pumping the systems had a trickle-down effect through the entire system all the way to the utility meter. As energy upgrades were completed, Sys-Tek provided field measurement and monitoring to validate the energy savings.

A project that includes adding a 20,000 square foot data center operating at 180 watts per square foot has a major impact on energy use, and goals were set at the onset to provide sustainability systems through design. With that said, several initiatives were implemented as part of the design from the beginning of the project. To optimize the chiller selection, the chillers were bid based on life-cycle basis which, took into consideration operating, as well as initial cost. Also, the cooling system selected for the raised floor used flooded refrigerant in-row cooling units, this provided cooling capacity to cool the raised floor where heat dissipation was in excess of 180 watts per square foot at some locations. The energy savings realized using this technology reduced energy use by over 30% when compared to traditional systems.

To validate energy use and to optimize potential savings Sys-Tek installed BTU meters in chiller piping systems to monitor the actual kW/TON of the chillers. Other work included optimizing the secondary pumping system by using a flow meter at the top of the 17-story risers instead of pressure differential, providing pressure independent control valves, and modulating fresh air based using hydrogen sensors in battery rooms. Additional current transformers (CTs) were installed on the main electrical distribution gear to monitor actual energy use of the chilling plant and cooling equipment used for the data center as well as other equipment. By having this information, control sequences were continually optimized through the start-up and acceptance phase of the project. Energy savings of over $30,000/month were documented by changes in the control sequence based on monitored information using the metering installed.

If your building is exhibiting any of these key signs, you may be able to improve energy efficiency and reduce costs through EBCx. 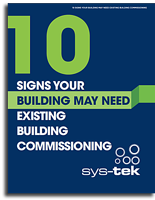