To use an analogy, a building automation system (BAS) makes up both the circulatory and nervous systems of a structure, constantly measuring, adapting to change and routing problems. A BAS is like the circulatory system in that it transmits signals and resources, namely electricity and air, wherever needed – much like the human body transports oxygen, nutrients and waste. Additionally, the BAS is akin to the nervous system in that it reacts to internal problems, detecting when breakdowns or mismeasurement affect the day-to-day functions of a building. 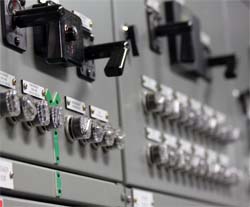 Though huge in importance and size, the behind-the-scenes automation system of building automation systems doesn’t usually have a centralized hub. Instead, hardware devices are obscured under floors or in ceilings and require time and patience to maintain. Though some newer facilities employ wall-mounted, thermostat-like controls, this practice is still far away from the norm. From a data management perspective, however, a BAS can be accessed through a pre-defined work computer either as a stand-alone software package or a web-based interface.

The data collection in a building automation system relies primarily on two things: controllers and sensors. Controllers administer the operation of equipment, machines and regions of the overall network. They make sure every facet of the BAS is doing its job and in essence curate the building’s nervous system. Sensors, on the other hand, measure the physical performance of controllers, taking records of energy efficiency, temperature and workload. Sensors can be stand-alone and detached from a system or be completely integrated within a control device, such as in a thermostat.

Returning to the body analogy, the sad truth is that a building automation system has no real immune system component – organized teams must service or repair any problem that arises. For regular maintenance, an in-house staff of operations is more than sufficient. System design and initial installation, however, is usually left to dedicated contractors. Such professionals can also help recruit and train potential candidates for the in-house team once the BAS gets online, guiding them to fully take over the facility and troubleshoot problems on an ad hoc basis. 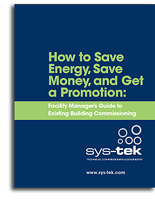 How to Save Energy, Save Money, and Get a Promotion