Under this project, we performed an in-depth engineering analysis of the chiller and piping distribution systems serving the hospital. The project objective was to determine the current state of operation and to develop a master plan that could be implemented, going forward as the facility continues to expand.

The result of our study and program development provided a clear and concise plan for the hospital to implement an upgrade program over ten separate budget years. By implementing the upgrade program, chiller systems will be reduced from four separate chiller plants to two, and pumping distribution will be centralized at the two central plants. In addition, risers between the various project additions will be increased and the plant controllability will be upgraded to allow for automatic operations.

Since the initial study was completed, sys-tek has continued to support the hospital with its plant operation through retro-commissioning and engineering study. Recent projects include the evaluation of the patient tower chiller plant, which resulted in identifying improperly sized pumps dating back to the original installation in 1992. Under this project, pumps were replaced, and by doing so, doubled the capacity of the chiller plant and increased overall operational efficiency by allowing this plant to operate in a crosstie arrangement with the 3rd floor plant. This resulted in substantial operational savings in both energy and reliability.

If your building is exhibiting any of these key signs, you may be able to improve energy efficiency and reduce costs through RBCx. 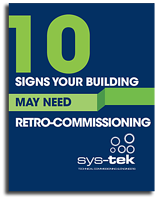 Our Purchase Guide to Existing Building Commissioning will tell you everything you need to know about finding the right commissioning agent for your facility.